Staff of LJHA departing this winter

This year we, unfortunately, said goodbye to a couple of our staff members, the first of which being Andrew Durdey.
After starting his work for LJHA in 2017, Andy has worked as our Property Services & Development Manager.

Regarding his departure, Andrew said:

“Unfortunately, due to personal circumstances I am having to resign from LJHA. I am very sad to be leaving an organisation that has meant so much to me but I now need to find a new venture nearer to home. I would like to thank you all for all your support over the 3 years I have been here.”

“I would like to thank Andy for his time effort and commitment over the past 3 years. Despite living in Sheffield, Andy was always there and available to both staff and tenants alike. Over the past 3 years, Andy and his team have made massive changes to LJHA including starting the Highmoor Refurbishment programme, numerous property upgrades, managing the in-house operatives and the opening of the reception. Andy has also ensured that compliance has been maintained including a programme of electrical testing, 100% gas compliance together with ensuring fire safety matters are always top priority. On behalf of all at LJHA we wish him well in his future endeavours.”

We are currently in the process of recruiting for a new member of staff to take up the role of ‘Property Services Manager’.

In addition to Andrew leaving in November, our Corporate Services Administrator, Zak Warren, is leaving in December. Zak started working for LJHA through an apprenticeship in May 2015 and has since been responsible for website management, social media, annual reports, tenant newsletters etc.

“As I am sure most of you are already aware, Zak will be leaving us on the 20th December for pastures new. I know you will all join me in wishing him the very best in his new role and to say he will be greatly missed.”

“I’ve been at LJHA for over 4 and a half years and i’m happy to say i’ve enjoyed my time here, however it’s time for a change and i’m lucky to have the opportunity I do to take my skills to a Leeds based charity to continue my development. I have met a lot of wonderful tenants, staff and other people during my role and i’ll miss these people a lot. Being here since the age of 16 means LJHA has been a second family of sorts during my ‘growing up’ years; I hope i’ll have the opportunity to work with some of these people again.” 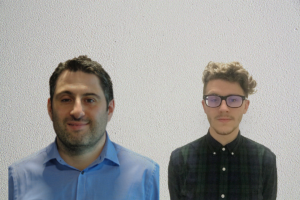