In early 2019, we took a look at our housing stock and decided to investigate various ways of developing new homes. Early drafts of plans for the proposed homes were showcased at this time and consultation with our tenants and the wider community began. The current plans include 2 new blocks of flats situated on the estate, one for General Needs tenants and one for Sheltered Housing tenants, the latter of which would connect to Stonegate Way to provide our Sheltered Housing tenants with a true ‘Sheltered Village’ and provide ease of access to the Marjorie & Arnold Ziff Community Centre.

The work will be completed by early 2022.

Engie are our partners on the project. LJHA are working with Engie to ensure that the development maximises the positive benefits for the local community and environment. Roof-mounted social panels are expected to provide 10% of the building’s electricity, while increased insulation within each property will promote energy efficiency.

Engie are also part of the Considerate Constructors Scheme, which includes respecting the community, considering the needs of neighbours and the wider public, and protecting and enhancing the environment. 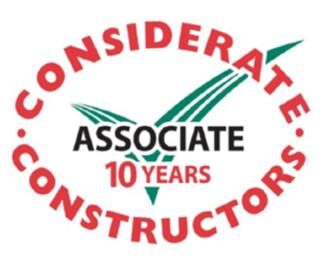 You can find more information on our joint resident engagement work here.

The photos below were taken at the start of the month, and show the sheltered block (A) having precast concrete floor panels installed to the second floor and general needs block (B) progressing. 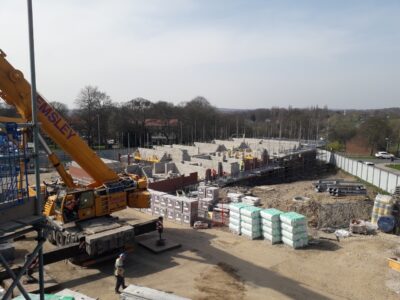 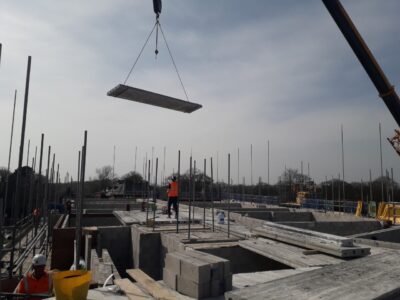 Here is a photo taken on 17th March, showing progress on the site. The photo was taken from Engie’s site office. 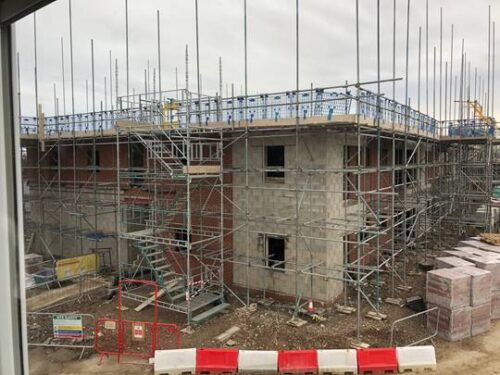 Both the general needs and sheltered blocks are progressing well. Some work was slightly delayed due to the winter weather – for example, the mortar doesn’t set if the weather is too cold. 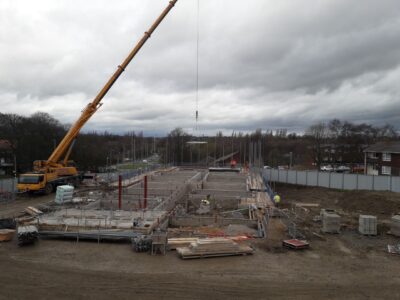 The photo below shows the progress of brick and blockwork to the sheltered block. 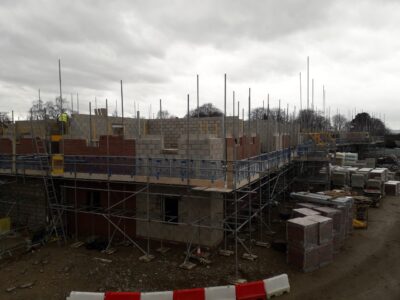 Here are some photos taken on 5th February.

This one shows a corridor in the sheltered block. 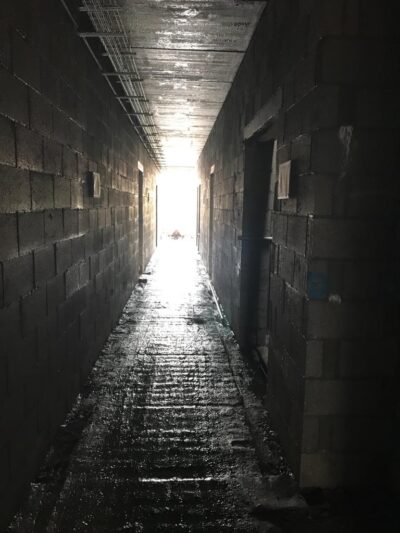 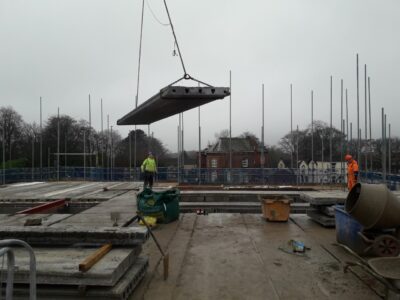 This shows the crane on site for the winching of the precast concrete panels into place. 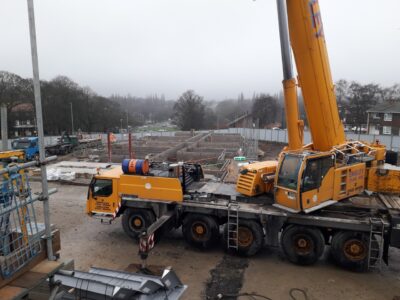 In the photo below, the Lower ground floor flats to the general needs block are being constructed 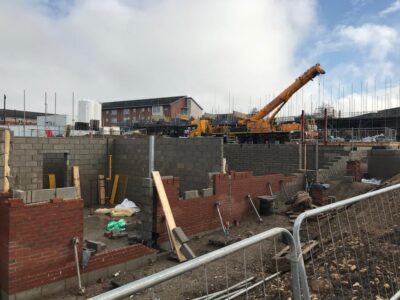 Below shows the lounge area facing the entrance to the garden 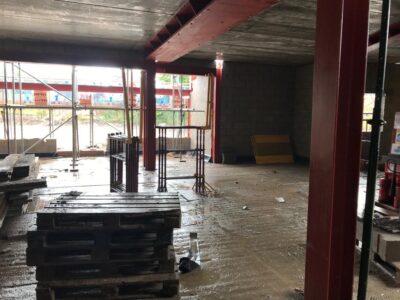 Here is a ground floor flat in the sheltered complex being built. 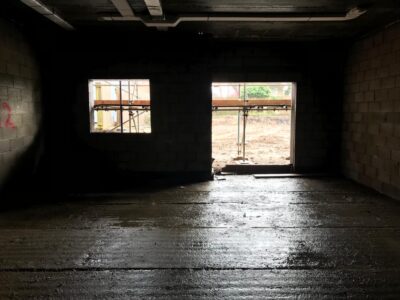 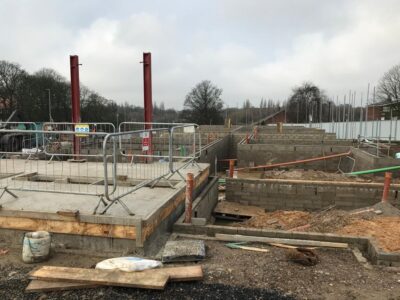 The photo below shows the gable end opposite King Lane 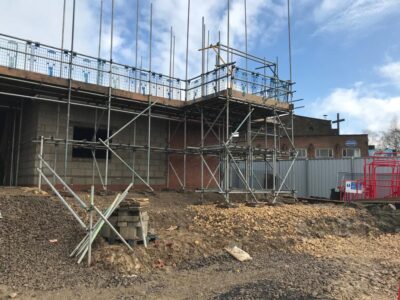 Here are some photos taken in the last week or so.

This photo was taken on 26th January, and shows the ducting being laid for the general needs block drainage. This is in preparation for the laying of concrete slabs for the ground floor 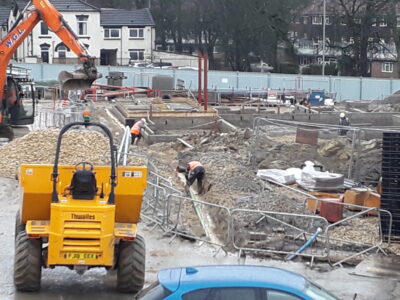 The second one, taken in snowy conditions a few weeks ago, shows the sheltered block as viewed from the compound. Where the skip is on the bottom right is where the general needs block starts. The team are doing their best to work hard in adverse weather conditions such as this! 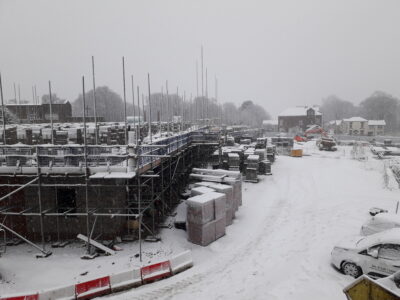 In our residents’ meeting on 26th January, the subject came up of Wifi accessibility in the new block, as well as electrical charging points. There will be 8 charging points in the communal parking area in the new development. WiFi and fibre will also be available in every flat, so that every resident has a choice.

Here are some photos showing progress as of 16th December.

A photo of the sheltered block next to Stonegate Way. A crane has been adding pre-cast concrete panels to the first floor. The general needs block can be seen at the far end. It’s also possible to see some of the internal partitions between the flats. 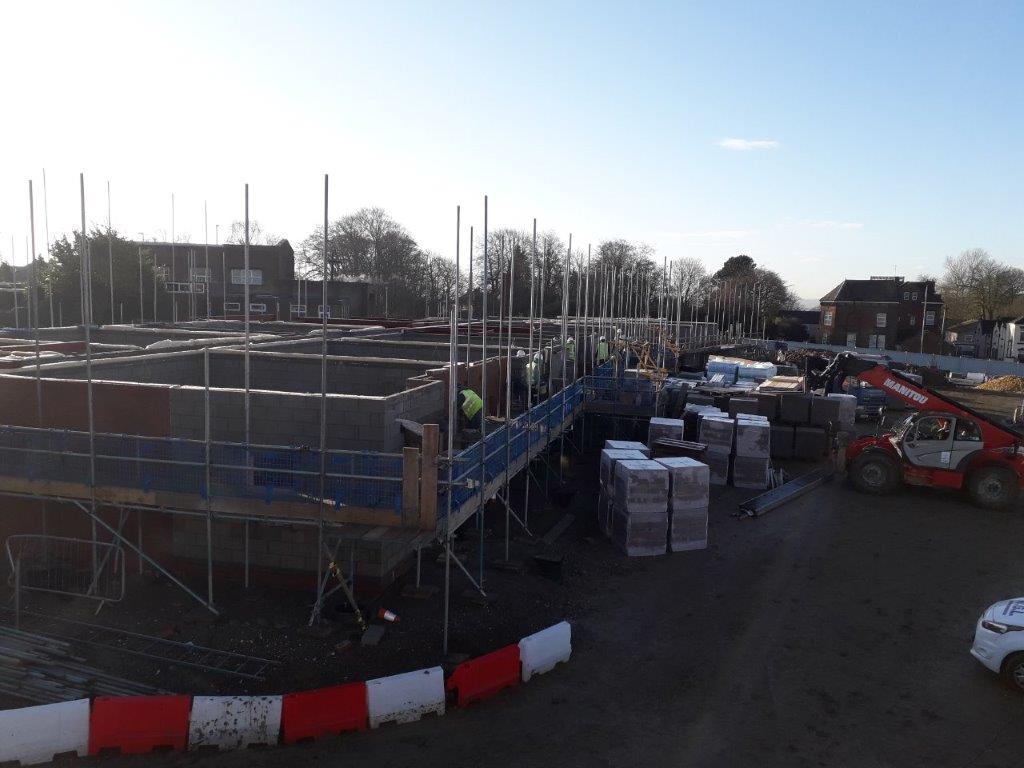 A view of the sheltered block, showing one of the communal corridors, which also shows where the entrances to flats will be. Where the Engie worker is shown next to the red steel frames will be where the communal areas will be. It will be a big open space. 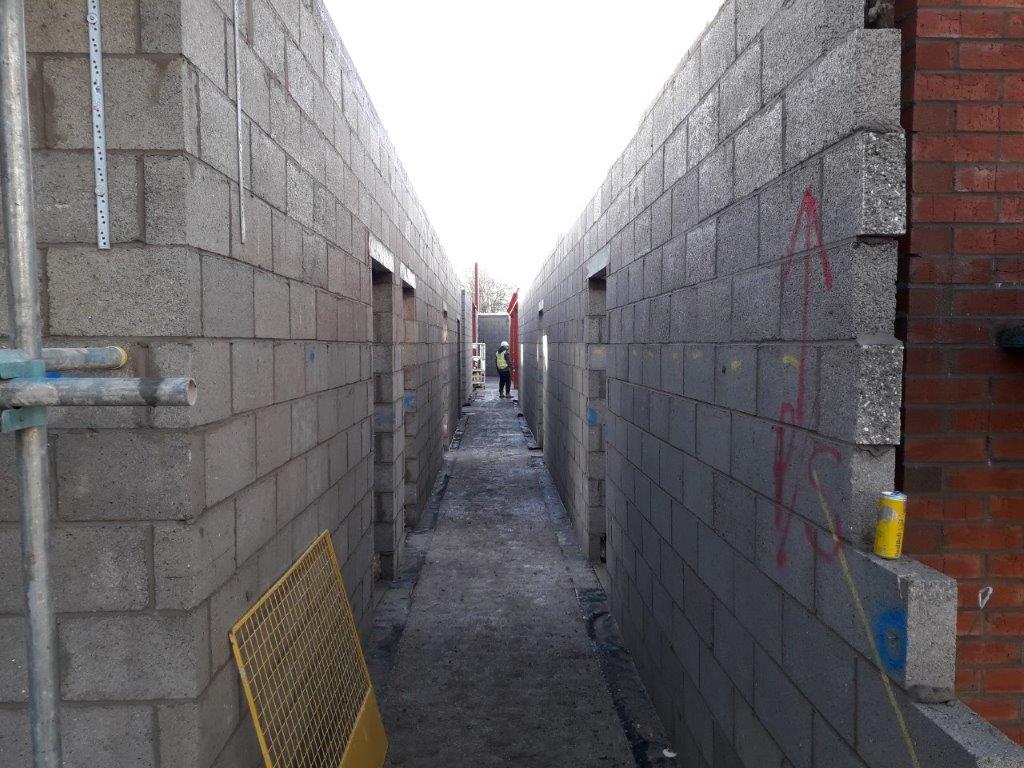 A flat in progress. Flat A2 refers to a type of flat being built. You can see where the window and a patio door will be situated. Where the muddy is will be where a landscaped garden will be situated. Behind the writing will be the location of the connecting corridor to Stonegate Way. 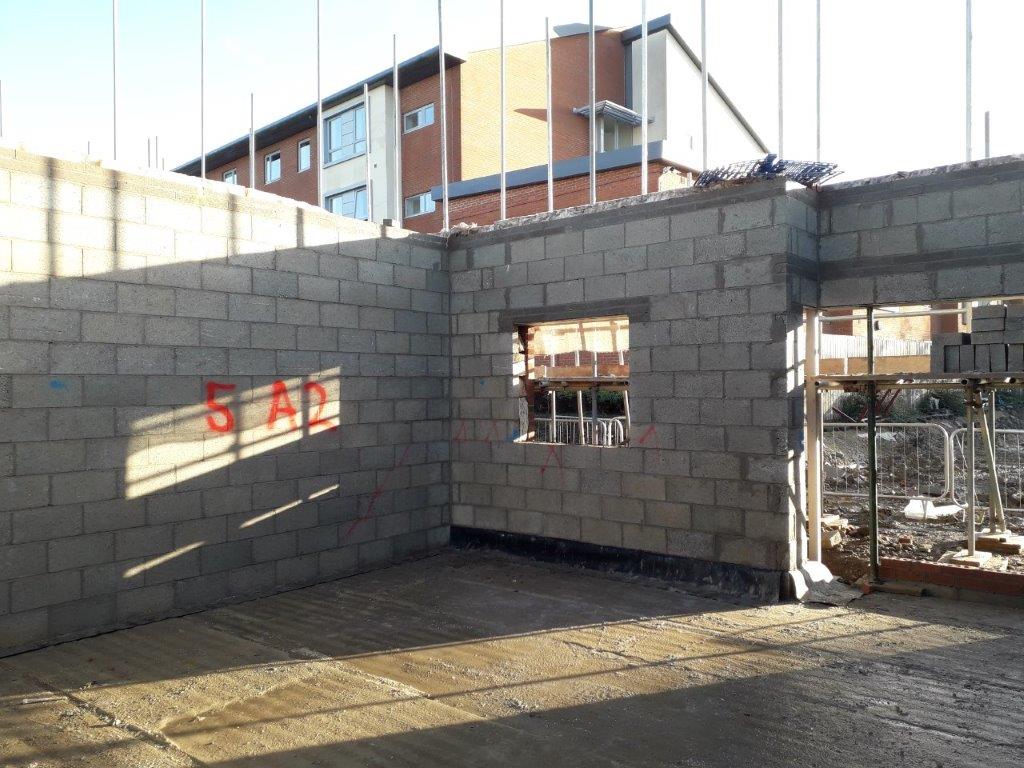 Finally, the general needs block in progress – this is the photo which has a ‘Pedestrians’ sign. This is at the bottom of the site, going down the street. The red steels will be a plant room. 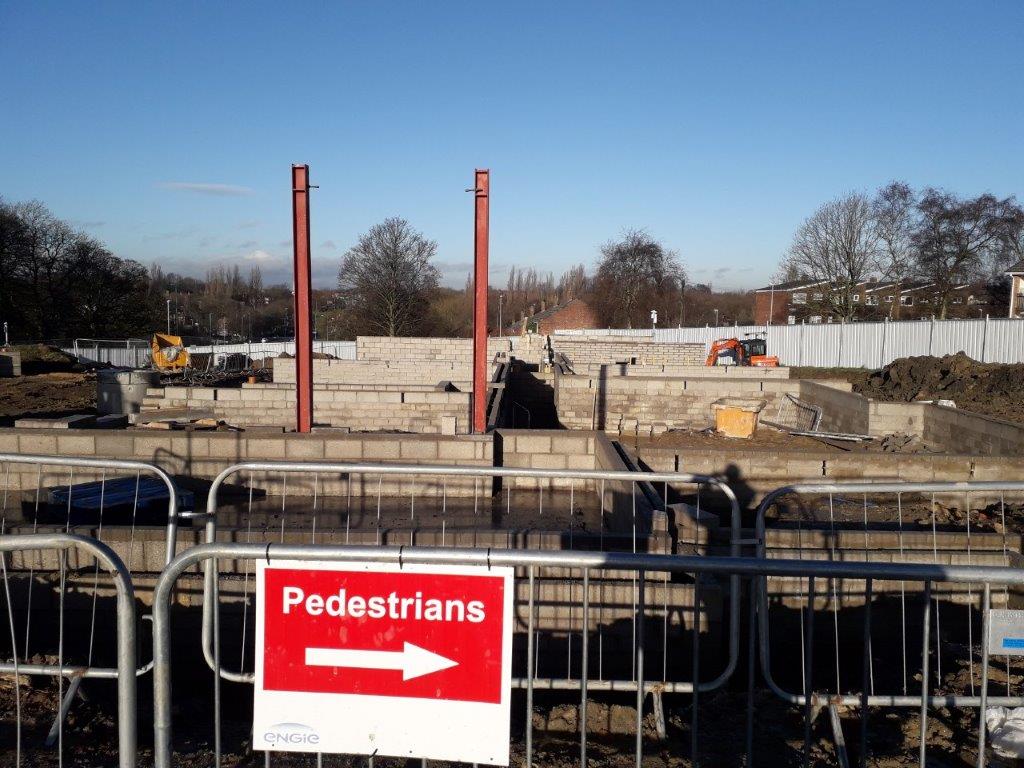 Due to our time-lapse camera facing the site, we can see that the concrete ground floor of the sheltered block in place and the block work walls being built, the red steelwork further back shows where the communal areas are in the middle of the building. The pile of black boxes on screen are the water attenuation tanks, which will fill up the vast excavation dug out next to the block of flats and be a rainwater soakaway.

Camera 1 points towards where the block of general needs flats will ultimately be, we cant see it at the moment because the buildings are being built about 2 weeks staged from each other and this is a couple of weeks further back, but also there is quite a dip in ground level and the foundations are out of sight at the moment.

You can see the latest camera footage at http://engie.onsitetimelapse.co.uk/

Building footprint starting to take shape. Steelworks start to be put in place. 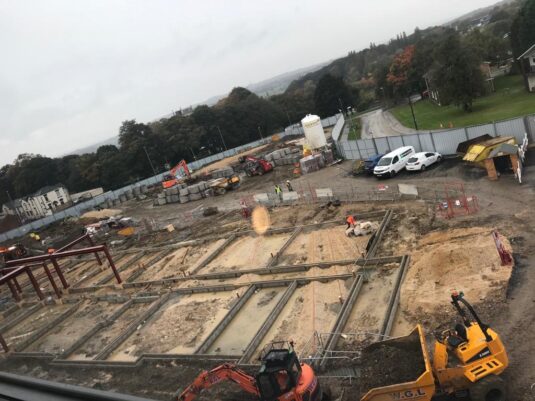 The first sods are cut at a special ceremony. Representatives from LJHA, Leeds Jewish Representative Council, and Leeds City Council joined an LJHA tenant to review progress on the scheme, which is due for completion by early 2022. 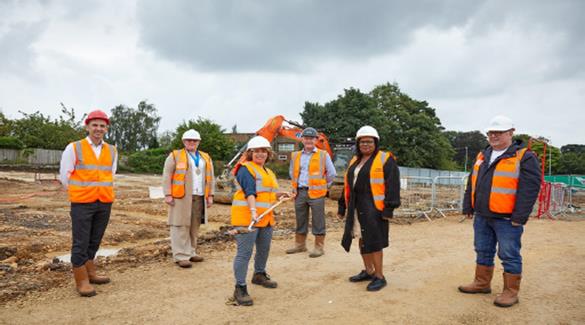 LJHA invite people to make suggestions for the name of the new general needs building on the site.

Month of September 2019
LJHA submit for planning permission for newly redesigned plans, and a meeting is held to inform the 22 tenants that live on Queenshill View and Queenshill Avenue that would be affected by the development of the new plans and recent updates to the process. This meeting is followed by a meeting with all LJHA tenants, neighbours, and councillors as well as the wider community to also showcase the revised plans, as well as to update everyone on recent updates to the process, such as applying for planning permission. The files showcased at these meetings can be located by clicking here.

5th June 2019
A meeting is held with the 22 tenants that live on Queenshill View and Queenshill Avenue that would be affected by the development, as requested.

7th May 2019
All feedback that was received for the previous consultation is presented to the Board of Management – after reviewing this feedback, the Board give the approval to continue with the development on Queenshill Estate.

Month of April 2019
LJHA host individual consultation sessions with the 22 tenants that live on Queenshill View and Queenshill Avenue that would be affected by the development.

27th April 2019
A meeting is held with Connecting Leeds regarding proposed highway development on King Lane.

2nd April 2019
Proposed plans and feedback survey is uploaded to LJHA website and social media, allowing people who were not at the meeting on 1st April to review the plans and provide their feedback.

1st April 2019
A meeting is held in the Marjorie & Arnold Ziff Community Centre where all LJHA tenants, neighbours, and councillors as well as the wider community, were invited to see the proposed plans for development and provide their feedback. Feedback forms were provided to everybody that attended so that their thoughts and suggestions could be recorded.

27th March 2019
An initial consultation meeting is held with the 22 tenants that live on Queenshill View and Queenshill Avenue that would be affected by the development. At this meeting, tenants who attended were informed of the LJHA’s plans to create a new Sheltered Housing scheme as well as a new General Needs scheme.